As an MNO or MVNO, you frequently equip the already provisioned profiles on your subscribers’ devices with new apps. When preparing the campaigns for launching the apps, you are faced with a lot of work in a test environment involving a wide range of commands. For example, the apps depend on proprietary elementary files (EF) and, unfortunately, creating EFs in the eUICC file system is not as simple as copy and paste. You need to use special commands to create files over the air so that testing quickly evolves into a real hassle because you must do it again and again.

Fortunately, our eUICC Profile Manager has the Command Sequencer feature! The idea behind this smart tool is to build a customized command sequence according to your specific test requirements. Do that and then run the command sequence and automatically execute all included commands at once. The next time you intend to execute these commands or reproduce test results, just fall back on the saved sequence. This also works perfectly well if you want to add several EFs to an eUICC as you will see in the following example.

Step 1
We start with a newly created command sequence named “Create DF(7F5E) with 3 EFs” and open the menu to add the first command: 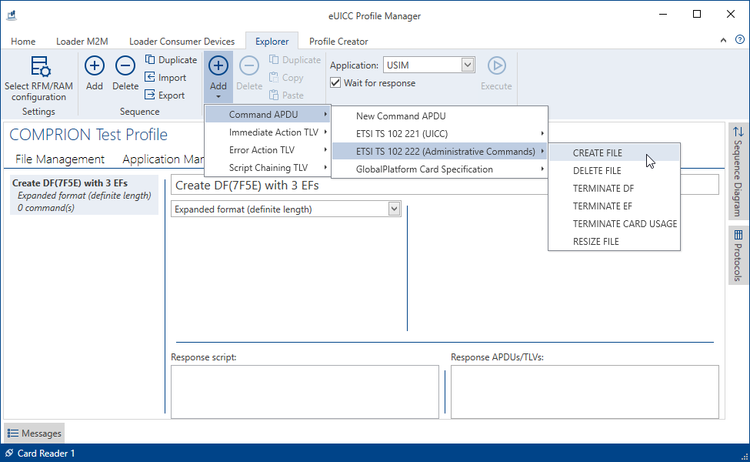 The commands on the menu are organized according to the relevant specs. In our example, we pick CREATE FILE from the administrative commands according to ETSI TS 102 222. The 3 EFs to be created will be added to a dedicated file (DF), so creating this DF becomes the initial command in our sequence.

Step 2
Starting with the DF, the command sequence is completed with the commands for creating 3 EFs. In the following figure, the command for the first EF has already been added: 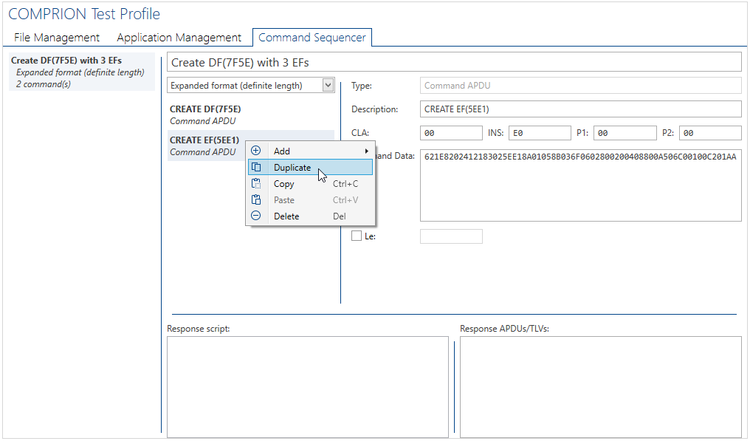 The APDU header is automatically inserted corresponding to the selected command type. We use the ‘Duplicate’ function for adding the two missing EFs in order to further facilitate the process. Then, only minor manual adjustments are necessary.

Step 3
Finally, we execute the command sequence and look at the results: 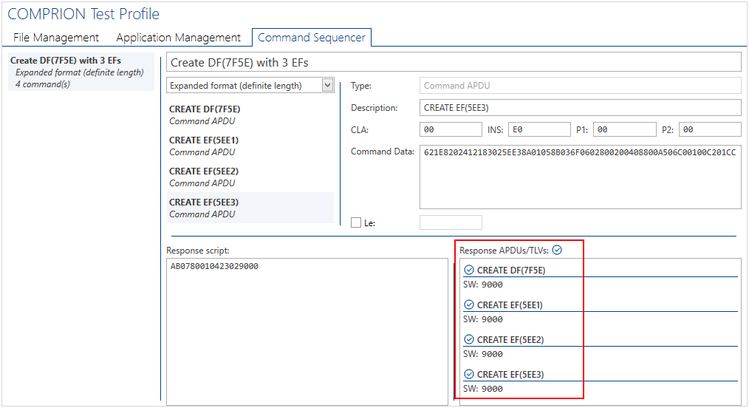 After the commands have been carried out on the eSIM in real time, the Command Sequencer immediately shows the results for every individual command. You can see at first glance whether the
operations have been successful (results in red rectangle). Here, everything is fine, all files could be created on the connected eUICC. (Being a nice person, you can easily share your command sequences with your colleagues using the integrated ‘Export’ / ‘Import’ functions.)

If you repeat several linked commands frequently, building your own customized command sequence with the Command Sequencer helps a lot. Just pick the commands from the provided lists in the editor, add the necessary data, and reuse the saved sequence instead of executing one command after the other, again and again. This way, file creation on eSIMs becomes ever so much easier. 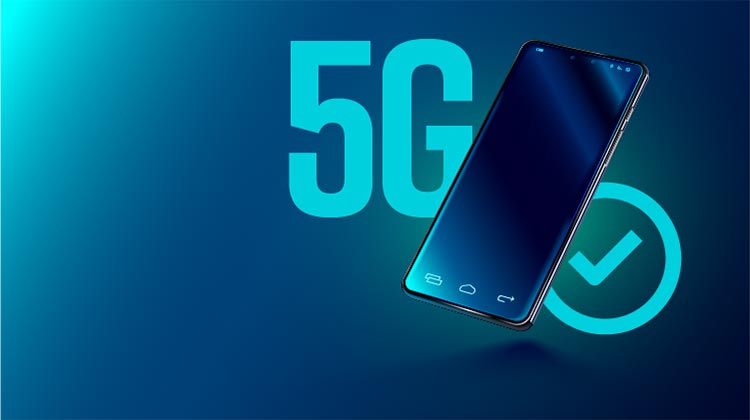