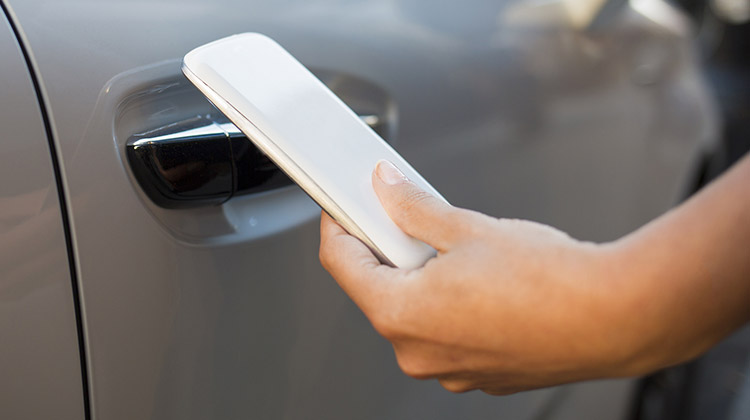 This article was published at the magazine "Electronics World", Test & Measurement supplement, June 2017

The automotive industry is certainly going to be one of the key industries when it comes to widespread application of NFC technology. Users, however, will only embrace this if they benefit from additional services. Only then, will this technology be able to penetrate the mass market. Therefore, the market introduction should be preceded by intensive testing that significantly exceeds pure conformance testing and starts early in the development phase.

Near-field communication (NFC) is a standardized RF technology that enables two devices to exchange information over short ranges (<10 cm) at a carrier frequency of 13.56 MHz. NFC uses the principle of electromagnetic induction that means that the devices have loosely coupled coils to transmit power and data at the same time. Inductive coupling allows one device to be powered externally, usually a passive tag or smart card.

NFC Forum has defined three operation modes for NFC devices, see figure 1. The first mode is the “reader/writer” mode, in which a device emits the magnetic field, reads data from, and writes data to a passive device such as a tag. The “peer-to-peer” mode enables two peer devices to establish a point-to-point connection, for example, an IP connection. Finally, the “card emulation” mode specifies the counterpart to the “reader/writer” mode. In this mode, the devices simulate a passive tag or smart card. 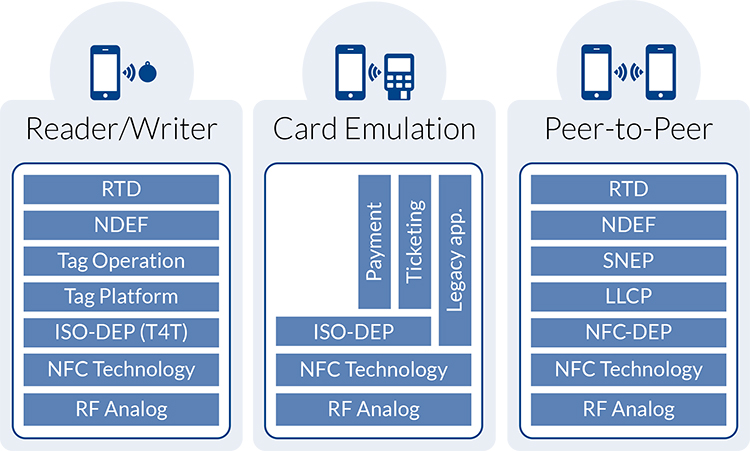 The RF analog and digital protocol layers are the same for all three modes. The protocol layer comprises three modulation types A, B, and F at a maximum data rate of 424 Kbit/s.

NFC is a mature technology. Contactless payment schemes have integrated NFC and it has become a standard interface on most smartphones. These days, NFC is widely used for ticketing, identification (e-passports), and access control. It facilities the connectivity of consumer electronics for pairing or exchanging information between devices such as configurations, business cards, or pictures.

NFC is a certified technology. There are certification schemes for mobile payments provided by EMVCo and for consumer devices as provided by the NFC Forum. Even for mobile phones, there are numerous test cases mandated by the Global Certification Forum to certify UICC-based NFC services on a phone.

NFC Use Cases in an Automotive Environment

The automotive NFC market is emerging rapidly. An increasing market penetration of NFC-enabled phones and new service trends such as car sharing, corporate fleet management, and the digitalization of car rental services are the main drivers in the market.

Digital car keys will enable a lot of new services and innovations. It will be possible to share car keys with others on a temporary basis, send car keys to a smartphone, and store them in a secure area such as the SIM or an embedded secure element (eSE). The mobile device will become the physical carrier of digital keys used for secure car access. In this scenario, NFC is the key for authentication.

Beside secure car access; there are more innovative use cases that go along with NFC technology.For example:

The crucial part of all these use cases is the user experience. These scenarios will fail if the driver does not experience that NFC is working properly, conveniently, and at the first touch. Thus, the interoperability of mobile NFC devices and NFC-enabled cars is one of the major challenges in this market.

From the technical point of view, the car’s NFC modules will mainly work in reader/writer mode or in peer-to-peer mode, whereas the smartphone will operate in card emulation mode. Today, there are numerous tests for the reader/writer mode, from the physical layer to the application layer.

What is so special about automotive NFC? First, the NFC touch point of a car is not as well-defined as in other applications, such as mobile payment. There are many ways of touching a door handle with an NFC-enabled phone. The so-called operating volume must be robust to cover different patterns of use.

NFC in automotive must work under severe operational environments like high or low temperatures and humidity. Different design parameters have an influence on the NFC communication and the operating volume, such as materials, car lacquer finish, and coil geometries.

Moreover, interference with other RF technologies may cause problems for the car’s NFC connectivity; for example, wireless power-charging modules, Wi-Fi, or Bluetooth.

Usually, the NFC stack’s digital protocol is not affected by the integration. The module manufacturer might even have pre-certified the protocol stack. The analog parameters vary during the integration of an NFC module into a car door or handle, dashboard, or console. Thus for every design, the integrating company has to validate these parameters.

In the automotive environment, performance testing, design validation, and pre-conformance are crucial parts of design and quality assurance. The integrated NFC module need not only be ready for certification but it needs to provide a high level of interoperability with NFC-enabled smartphones. Let us have a closer look at the physical characteristics of an NFC reader. 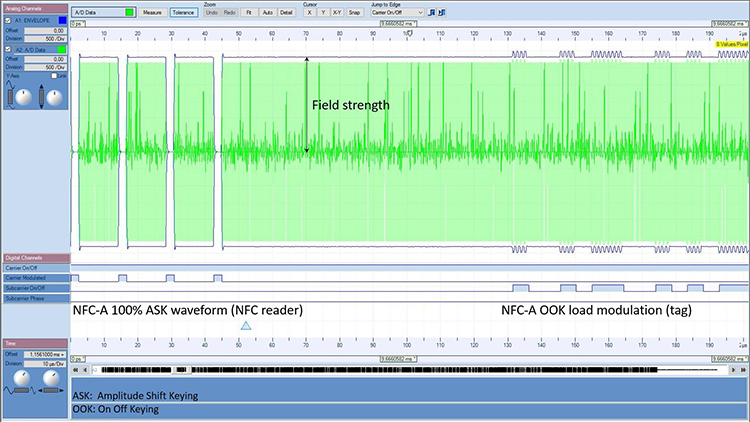 Conformance tests verify these characteristics in a predefined operating volume. This operating volume defines a volume that provides a minimum level of interoperability. It is rather coarse with a total of only fifteen measurement points, assuming that the NFC antennas are parallel to each other. In order to certify an NFC module, the tests must pass a subset of these measurement points successfully. Passing conformance tests will thus be necessary for certification, but will not suffice for an acceptable level of interoperability. Better results can be achieved by completely characterizing the reader’s near field, as explained in the following. 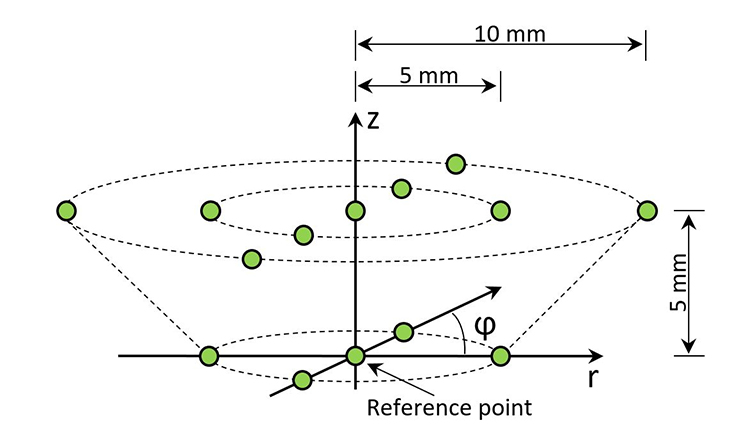 For conformance testing, so-called reference PICCs (tags) are used. These reference PICCs influence the magnetic RF field and simulate tags with different load modulation and antenna geometries. However, conformance tests do not take into account other electrical parameters, such as resonance frequency, quality factor, and loading effect. Once again, conformance testing defines a minimal number of types of tags with load modulation at its limits and different antenna classes to provide interoperability. In order to assess the reader’s real performance, it is advisable to enhance the conformance tests by additional tests, varying more tag parameters, and thus simulating a variety of tags.

Describing the Near Field

The operating volume of an NFC reader is defined as the three-dimensional space, in which an NFC device can exchange data with a tag or another NFC device. This space is represented by a set of n points pi(x, y, z), i=1...n. Most physical parameters of an NFC reader are thus a function of these spatial points.

For performance testing as part of the design validation, the question is what the operating volume of the NFC reader actually is. Thus, the operating volume is rather the result than the input to testing. Moreover, it is possible analyze the near field as a vector field and to test scenarios, in which readers and tag coils are positioned at a certain angle to each other. 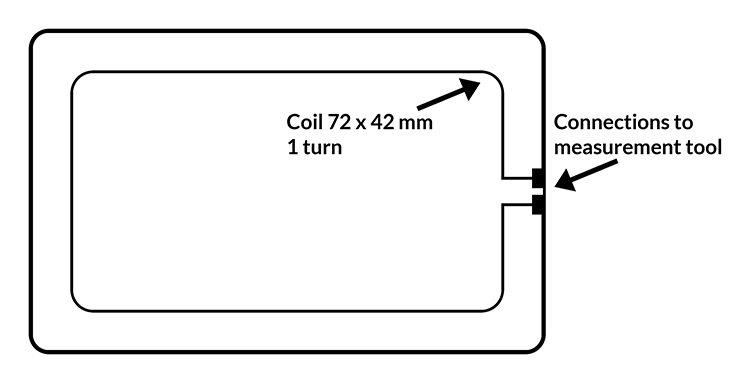 It does not have a significant loading effect on the near field and is rather neutral. Both, the reference PICC and the calibration coil have a big area so these coils measure the integrated value of the flux density B through the coil area (the magnetic flux). A third approach is to minimize the coil dimensions, which results in lower voltages measured but more precise field strengths. These coils (<1 cm in diameter) can be combined into one probe to measure all components of the field strength vector at each spatial point.

A similar approach can be applied to characterize the NFC reader’s reception performance or sensitivity. A shmoo plot can visualize at which spatial positions the communication between reader and simulated tag is successful. Moreover, it is possible to take into account the minimal load modulation amplitude that is needed for a successful communication as a function of the reference points.

Some examples to illustrate a near field; Figure 5 the field strength of an NFC reader in z-direction measured by a reference PICC at position z = 30 mm. 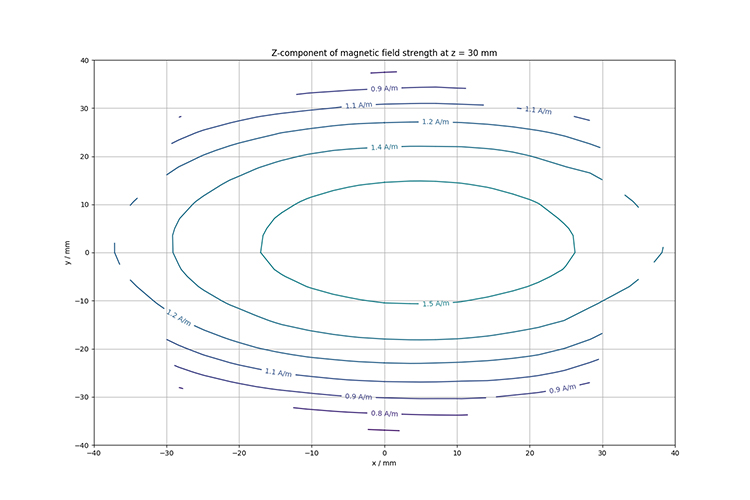 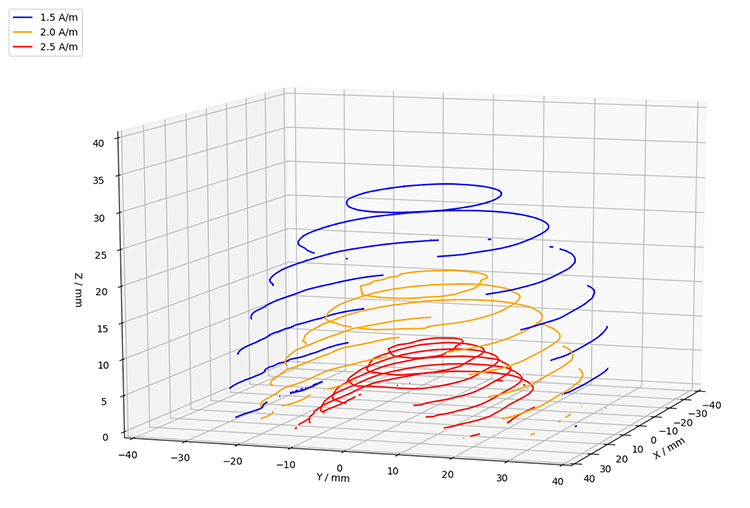 Figure 6: Magnetic field in z-direction as a 3D model with contour lines 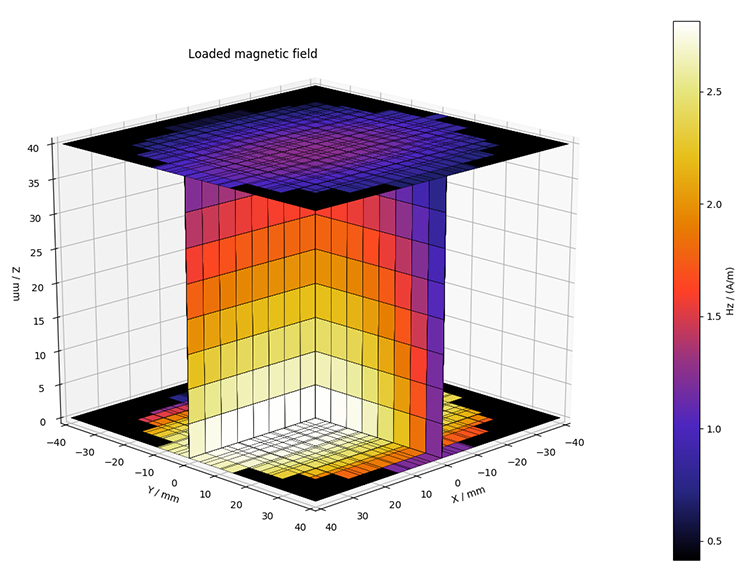 Figure 7: 3D model of a loaded near field as a heat map

Overall, near-field characterization as part of performance testing can generate valuable and extensive results for a design validation and enhance conformance tests. It will help designing a more robust product and thus increase interoperability to an acceptable level.

The performance tests described above were derived from the corresponding conformance tests. Therefore, a conformance test tool is fundamental to perform those tests. Moreover, the degree of automation and the speed of the instrumentation are essential, since there are measurements at numerous positions, for example, only 20 measurements in each direction yield as many as 8,000 recorded results, for a vector field, even 24,000. Exact and flexible positioning is vital, too. The most flexible positioning system is a 6-axes industrial robot arm.

The NFC Forum has primarily implemented requirements of the Car Connectivity Consortium (CCC) in their new certification release CR13. COMPRION is the...

With a simple software update all EMVCo laboratories and terminal vendors can prepare for the new EMVCo version 4.3d for terminal approval Level1. It...