Press Releases
back back

Paderborn-based COMPRION has reason to celebrate: the company looks back on 20 successful years in the telecommunications industry. With its test solutions, COMPRION continues to make a decisive contribution to the security and compatibility of today's smartphone and card technologies.

The success story began in 2002 when Dr. Torsten Maeser and Michael Wehmeier, founders and managing directors of COMPRION, set up their own business. Maeser and Wehmeier recall: "When we founded our company as a management buyout in 2002, making phone calls and sending text messages were the essential functions of cell phones. That's why testing was primarily concerned with the correct and reliable interaction between the SIM card and the cell phone and product certification in accordance with global telecommunications standards. 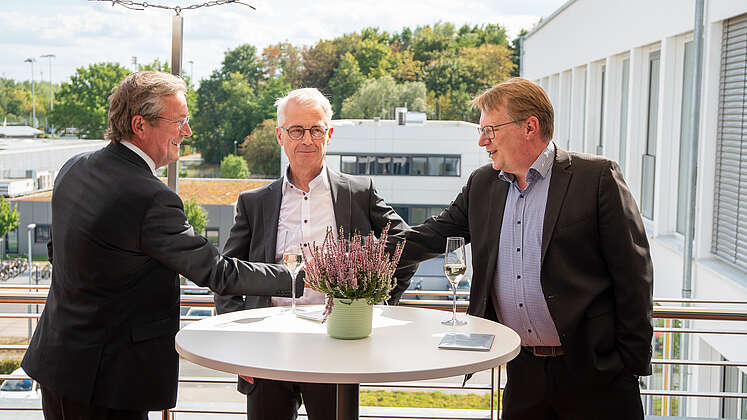 Michael Dreier, Mayor of the City of Paderborn congratulates the two Managing Directors of COMPRION Dr. Torsten Maeser and Michael Wehmeier (from left to right).

A lot has happened since then: 2G has become 5G, and the permanently installed eSIM is increasingly replacing the classic SIM card. The smartphone is mutating into a true all-rounder - it is used to make contactless payments, gain access to buildings, and soon car doors will be opened with the mobile device. All these different technologies have to be tested and certified in advance before they are launched on the market. Today, almost all well-known manufacturers of smartphones and payment terminals rely on COMPRION test solutions.

A lot has also changed in terms of personnel and space over the 20 years. In 2002, the company moved into rented premises in Hoppenhof with a total of 17 employees. Due to rapid growth, the company had to move several times within the first few years. In 2015, COMPRION then acquired the property in Almepark Nord, opposite the SCP training center and Hesse GmbH, where it still has its headquarters today with over 90 employees.